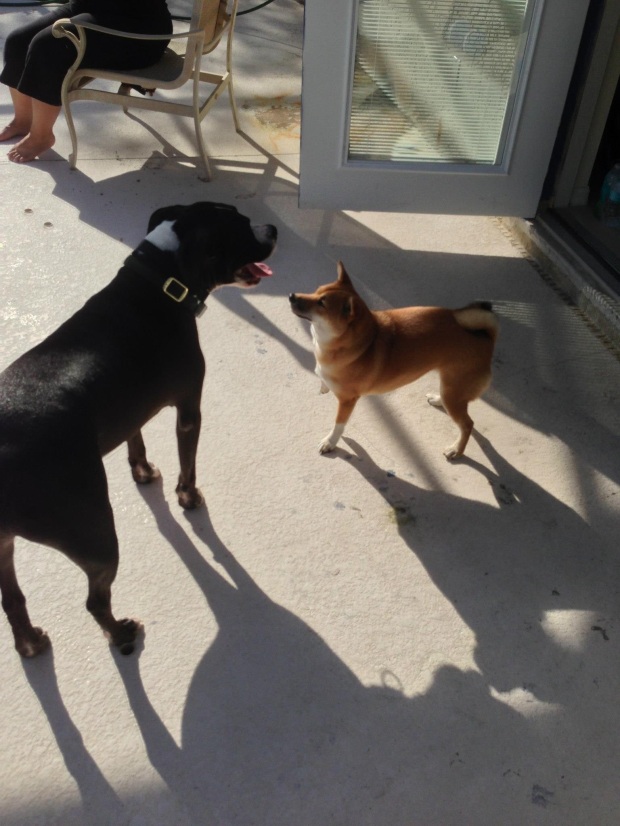 The little Shiba Inu is my puppy. Her name is Ryka. I sometimes call her Hell Spawn. Her big Pitbull friend is named Seven…as in Battlestar Galactica. He’s a really sweet guy, and both my girls consider him a friend.

Here is a picture of all three of them frolicking by my pool after their morning walk. My girls, though they love the outdoors, hate the water. My best friend’s boy doesn’t have the same problem much to their consternation and concern.

In fact, my little one came to check on Seven once he was done with his swim…just to make sure the evil water hadn’t poisoned him or made him sick.

It’s funny… Pitbulls fall under the “aggressive dog” category, unfair though it is. There are actually people out there who think these loveably large oafs are born vicious. What a crock!

Here’s what I’ve noticed. Some of the most naturally aggressive dogs I’ve met have been the “dress-me-up-and-put-me-in-a-purse” variety. It’s as though they suffer from little big man syndrome. The thing is, the damage their bites can do are pretty minimal. Size of mouth correlates with damage of bite, so it stands to reason that a bite from a Pitbull can cause serious damage.

Really, though, it’s owners who ultimately dictate the behavior of the dogs. Vicious animals are usually trained to be that way. Sadly, when dogs act out or misbehave, rarely do these same owners take responsibility for their own action. Why are they surprised when the dogs act the way they taught them?

Yup! Seven sure looks mean and dangerous to me! Are you an animal lover? What do you guys think about “aggressive” dogs?