Losing and Loss. Both can teach such strong lessons. But what we learn is entirely up to us. How we choose to view these potentially defining moments.

For example, Derek Redmond, a runner in the Barcelona Olympics was supposed to be a shoe in to win the gold, but the unexpected happened….

Imagine training your whole life for this one moment, and then something like that. I remember the first time I saw this… I knew it was a hammy. I’m pretty sure he did, too.

But he also knew he had a choice. What would you have done?

What he did blew my mind and had me in tears, applauding his courage.

His father ran out to him. (Yeah, that was his dad…who, in today’s world would’ve probably landed himself in jail at the very least for interrupting a sporting event.) He asked him what he wanted to do. At that point, there would’ve been no shame in giving up. But he didn’t come to the Olympics to give up! He may not have won, but he finished. And he had his father, who held off all the officials who tried to stop him, and the crowd supporting him.

In my book, that choice he made in what had to be one of the most devastating moments of his life, made him a winner. And someone to look up to.

And when it comes to loss, we have choices, too. Nothing has brought that home, lately, quite the way the attacks on Paris have. And yet, through the fear and terror…people reached out. Despite the danger, people reached out via Twitter to let others who were stranded and with nowhere to go where they could find a safe place, an open door.

The rest of us watched in both horror and heartache, offering what comfort we could by letting Paris know, much like they’ve supported us through some of our hardest times in history, that our hearts and thoughts were with them. We put up pictures and banners on Facebook, hoping to let them know we stood by them.

There was courage and friendship and unity. In that moment, it was all about love and support…as it should have been. (Unfortunately, that didn’t last, but that’s all about hate and politics, which I choose not to give a foot hold on my blog.)

I think we were all praying this sort of prayer for those stranded…. (I thought it appropriate to select a song from Les Miserables).

And in honor of all our French friends and allies… How awesome that this scene in Casablanca was already there for them when we needed a reminder that freedom requires folks to stand up and protect it?

So that’s what’s been on my mind lately… What about you?

Today I’m Thankful. For friends. For family. For freedom. For success.

And for heartbreaks. And losses.

Because they gave me a chance to experience the love and friendship that came before.

This last week I lost a close personal friend. It was unexpected. Came out of nowhere. I stood up in her wedding. She was only 30. She was one of those people who asked me for sex advice. Who laughed and flirted with me. Who I Dommed, just a little bit…all for fun. She’d come to my pleasure parties. In fact, I threw her a pleasure party before she got married because she had a dear, adventurous heart and wanted a sex swing. But at the core of it all, we were friends of the heart.

I was a mentor for her professionally. She was a supportive friend. We shared a passion for dogs. Talked about arranging a play date for our girls. Sadly, it never happened, and now it never will. Life happening, and us not spending as much time together as I’d have liked are my big regrets. But she lived big and loved bigger, so I’m thankful for the time I had with her.

I’ll never forget her. And I know she’s smiling down at me as I remember our shared laughter and the irreplaceable moments. We had a friendship that lasted a lifetime.

I’m also thrilled and thankful to announce that I’m sharing a part of myself in one of the coolest projects with one of the most amazing people I have the pleasure of knowing.

August McLaughlin, the host of Girl Boner radio and author of suspense thriller, In Her Shadow, invited me  along with several other authors and experts to contribute to  a project of love. 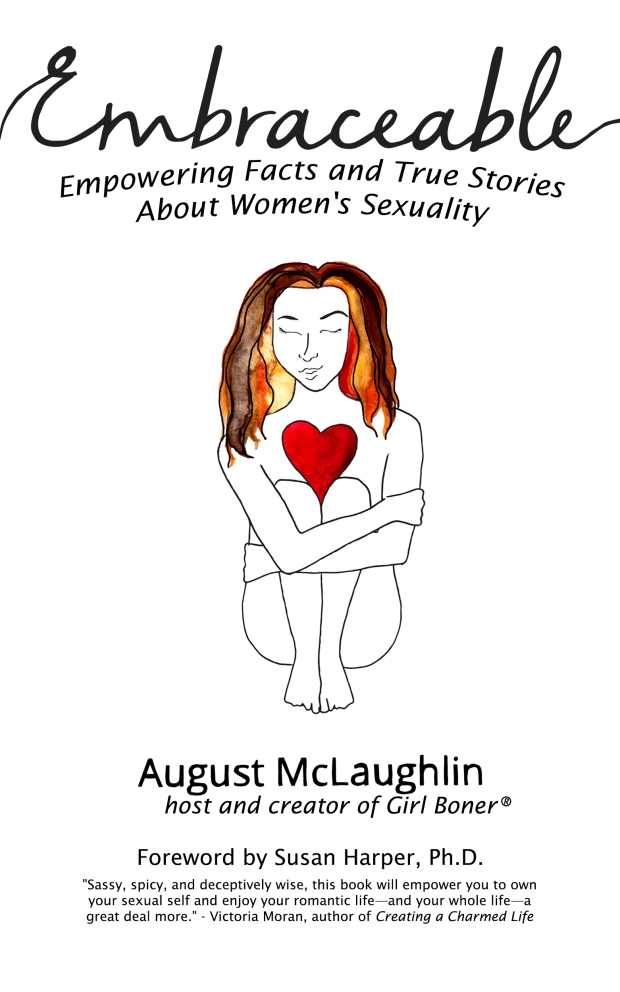 This book, all about empowerment and strength, will be coming out soon. Isn’t the cover charming? To read more about the book and the various contributors, CLICK HERE! If you’d like to help spread the word and join in the blog tour for the book, click there, too. The way to sign up is there, too.

Finally, I’m also thankful for my newest nephew who, after a scary introduction into the world, is thriving. My sister was due to have her first child this May. He actually arrived much earlier… Like. February. He was in the NICU for a long time as he was a micro premie, born at 1.5 lbs. It was a scary time for our family, and was the beginning of my radio silence. These days, though, he’s a ray of sunshine and a ball of energy…and enjoying his first snowfall. I’m sure my brother is looking down from heaven, enjoying his nephew’s laughter and grins.

So, despite all the craziness and challenges…. I’m both thankful and blessed. God is good, and I have faith that he has a plan. I just don’t know what it is. 😉

What are you grateful for?

Let me go.
I’m not here…
Chase your life;
Face your fear.
Find your passion
Feed your soul,
Reach for things
That make you whole.

Honor my gift,
Cherish and share,
The joy in remembrance;
You’ll find me there.
So open your arms,
Set yourself free,
And smile when you think back
On memories of me.

It’s been a while since I’ve been on here because life kind of got away with me. But today I was inspired to write something special. Something specific.

I was at a celebration of life service today. The mother of a friend passed away, so I went to help their family honor her. It also reminded me of some of my losses, but instead of focusing on what I hoped they knew, I found myself focusing on the message I’m pretty sure they wanted those of us left behind to hear.

A lot has been going on in my universe this last year. I started a new day job; one that I love, but limits the amount of time I have for writing, but it allows me to help change people’s lives. My sister gave birth to our first nephew on my side of the family….waaaay early. There were fears that we could lose them both, but they’re both thriving these days. And then there’s the step-dad. As most of you know, he’s more a father to me than my bio dad. Keep him in your thoughts. He’s battling cancer. I effing HATE that word.

What I’m trying to say is…. Please be patient with me. I still love you guys. I’m still here. I’ve just had a lot going on…. Including a project that I can’t say anything about yet. But I will. I miss you guys.